Team Building is an important skill that is required in every field among the workers. One should be highly capable of performing in a significant way in a team. It does not matter even one gives some positive results as an individual worker until he has the ability to function as a team along with some group of people. So, each and every individual should develop the skill of performing in a team under a team lead. The company trains the workers through various activities which helps them to learn the Team Building skills.

There are various activities such as Back to Back Drawing; Hole is many, Silver Lines, old Couples, Code of Conduct, and even more. These activities will be easier just like a game and so it can easily teach the skills. The activities need some less time which can be less than an hour and can be performed during the free period. The company can choose these activities to train the workers rather than spending a high amount of giving lectures on team building. The lectures seem to be very boring for the people and it is very useful to the people when they are taught practically. This practical teaching will have a greater impact on people. 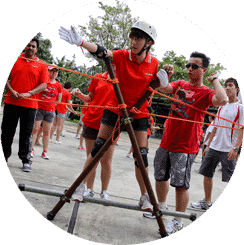 The physical activity of finding words through body actions is called Body of words. The participants of the game are separated into various groups each consisting of nearly 5 to 8 members. The members of the groups should write some words with the same starting letters. The words must contain the number of letters which is one lesser than the total membership of the group. Each and every group will have a team lead and in every turn ends, the team lead can be changed as per the wish of the participants. The team lead will act the word written in the card to the other people. The group which finds the correct word within less timing is declared as a winner.

The other indoor activity is Campfire stories. This activity encourages the team members to share their experiences in the workplace among the other persons. Some words are written in a whiteboard and the persons are expected to share their views on the words which should be related to the workplace environment. The other members of the team will listen to the person and write some other interesting words related to the workplace. Then the noted words are written down in the whiteboard and the same process is to be repeated. In this way, each and every person in the team will get the chance to share their experiences in the team. This will help the other persons to understand the thoughts of the person and can have a good team experience.

Thus, through these interesting activities, one can develop a greater understanding of the team members which will be very useful in performing as a team. This will help the team members to help each other and also to accept the opinion of others in the team.

Now you’re getting me so excited to play this!